Since May 2007, PDB coordinate and NMR data deposition proceeds through the ADIT-NMR server.  Deposition of structure coordinates, chemical shift assignments and structure constraints is compulsory.  Unless an NESG structure is being held as part of an external automated structure determination competition, like CASP or CAS-D, all deposited information is to be released immediately after final approval of the PDB or BMRB entries by the principal investigator and responsible scientist.

Before starting ADIT-NMR, be sure to prepare your files for deposition accordingly using the standard NESG protocols for PDB and BMRB depostion.  Be sure that the sequence information in your coordinate file exactly matches the entire protein sequence (i.e., including tags), even if there are unassigned residues excluded from your deposition.  To avoid any confusion at a later date, it is recommended that you collect all final files in a separate directory within your structure determination project.  Also, be sure to gather together all the sample information and biological information associated with your target; most of this information can be accessed through the SPiNE database.

One initiates an ADIT-NMR session by providing your e-mail address and selecting either PDB or BMRB deposition.  The user is immediately e-mailed a restart session ID, which allows the user to log out and restart a session at a later time.

Next, experimental files (PDB coordinates, chemical shift assignments in bmrb 2.1 or 3.0 format, the final structure constraints concatenated in one file, NOESY spectral peak lists) are uploaded.  There are precheck and validation procedures prior to the generation of a series of data entry pages and sub-pages (i.e., entry information, citations, molecular assembly, experimental descriptions, structure determination).  An example of the ADIT-NMR data entry form is shown in Figure 1. 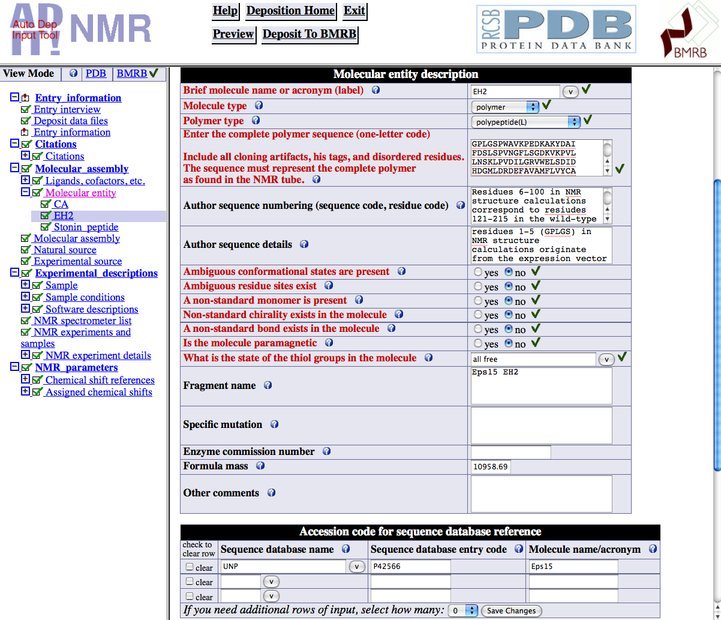 For each field, proceed through filling the required boxes (indicated by red asterisks).  Many fields have pull down menus, and the software remembers similar responses entered in other fields.  When a field is complete, a green check appears; incomplete fields remain red.  If any required information is missing, the user will not be able to complete the deposition.


When the user completes all sections of the deposition, it is recommended that a preview document is created for editing prior to depositing the entry.   When the entry is deposited, the user will immediately receive a PDB or BMRB ID number.

Once the user has completed a session (either PDB or BMRB deposition), one can proceed to either BMRB or PDB and a new session is made populated with data from the old session.  For example, users can complete the PDB deposition first then proceed to BMRB, or vice versa.

Finally, collect your PDB and BMRB ID's and proceed to HarvestDB to enter your final project into the NESG structure gallery.

Click here and here for documentation on ADIT-NMR from the BMRB and RCSB web sites.