The lock system keeps the spectrometer operating at a constant net magnetic field. It compensates for the drift of the superconducting magnet's field and other instabilities. The current in the z0 coil is adjusted so that the lock resonance matches a predefined frequency lockfreq . Before activating the lock system you have to find the lock resonance.

For detailed information on locking you sample see

Note that BioPack installation alters the interface described in the original manuals.

First you must start the lock signal display. The channel selector for probe tuning should be at 0.

Make sure the the lock system is not activated:

Adjust z0 to locate the lock resonance. You may increase lock power and gain to see the signal better. When manually adjusting z0 the following rule holds: the closer you are to the resonance, the fewer sinusoid "beats" you see. When on-resonance you should see a straight line. The figures below show examples from a typical locking process. 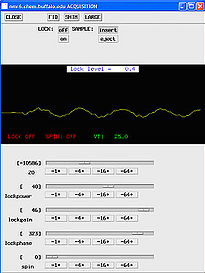 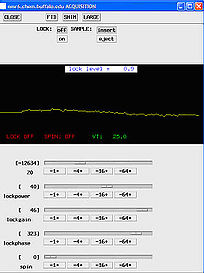 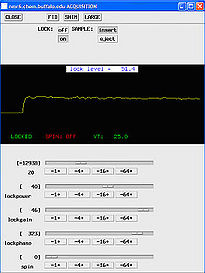 Adjust lock phase to maximize the lock signal. You may actually need to re-optimize lock phase after shimming.

Adjust lock power to maximize the signal while avoiding saturation. In the unsaturated state decreasing lock power by 6 dB should make the lock level drop by one half. Under saturating conditions the lock resonance is distorted and this may pose a problem for shimming on the lock.

Normally you want to have the highest non-saturating lockpower and the lowest lockgain, which yield an acceptable lock level. Lock level should be above ~20 for the sample to be locked. The lock level will usually increase after you shim the sample. It should be ~50 or higher before you run a real experiment, because if the level drops below 20 during acquisition (due to gradients, for example) lock may be lost.

The field produced by the z0 coil has some slight z-dependence (mainly linear), which is usually compensated during shimming. On machines with very large field drift this may require use of hardware autoshim during long-term experiments.

This procedure usually takes longer, but may be useful if cannot find the lock resonance manually.

Note that you will still need to manually adjust lock power to avoid lock saturation.

The position of the water line in 1H or 2H spectra has a strong dependence on temperature. Since lock tries to match the deuterium resonance of water to a predefined frequency, z0 will be different at different temperatures.

It also means the total B0 field will be different even for the same spectrometer and sample locked at different temperatures. Thus, the DSS spectrum should be acquired at the same temperature as the protein sample being referenced. Alternatively, the DSS line position can be tabulated at various temperatures and it temperature dependence determined by a linear regression - this referncing method is employed by Agnus. This referencing method is also unaffected by lockfreq reset (see below).

To make sure that the carrier offsets (tof, dof, dof2) remain unchanged, the lock solvent has to be specfied by setting the solvent variable. For example, for protein samples solvent='d2o'. For proper names of other lock solvents see the /vnmr/solventlist file in your VNMR or VNMRJ installation

Locking requires setting z0 so that the deuterium resonance of the solvent (D2O in protein NMR) matches the lock frequency lockfreq of the spectrometer. One day you may find that the lock resonance is beyond the operating range of z0. In this case it is necessary to reset lockfreq to a lower value. This parameter has to be changed on 500MHz, 600MHz and 750MHz instruments in Buffalo about once or twice a year depending on the field drift.

Run config to open a spectrometer configuration window and key in the new frequency there, then type su to enable the new setting. Record this event in the logbook and inform other users of the instrument. You must be running VNMR or VNMRJ as vnmr1 users to do that. Regular users do not have permissions to modify configuration.

There is always an issue of how big the change in lockfreq should be. Obviously, it should not be so small that you will have to do it again next week, and should not be too large that your z0 is out of range in on the opposite side.

DO NOT type something like lockfreq = 99.999 at the prompt. This would only be valid until you restart VNMR or VNMRJ and is grossly confusing.

IMPORTANT! Changing lockfreq significantly affects referencing with DSS, since you change the B0 field of the spectrometer. Always record a 1D DSS spectrum with a new lockfreq.

The following description pertains to systems with Bruker TopSpin v. 2.0 and higher.

After inserting the sample, the user opens the lock display using the command:

This open the lock display (see below).  If unlocked, one observes the ringing signal (left); if locked, then the lock signal is a flat trace (right). 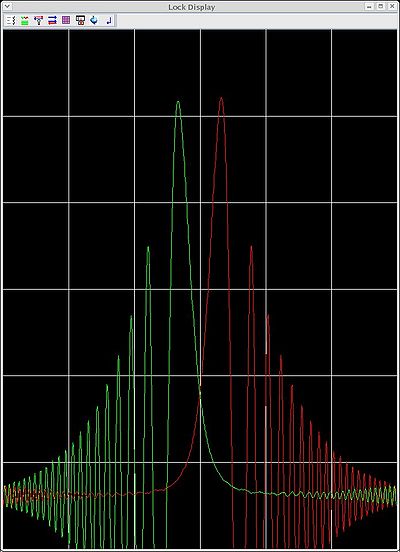 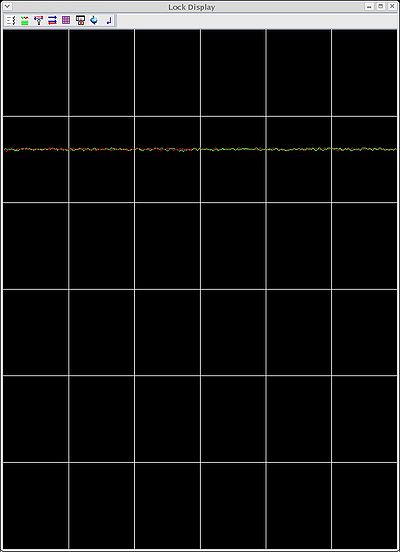 With the system unlocked:

With the system locked: