Residual Dipolar Couplings (RDCs) originate from the anisotropic component of the dipolar interaction, which is dependent on the angle between an internuclear vector and the magnetic field. When a molecule samples orientations uniformly, as it does in normal solution NMR, RDCs average to zero and are not observable. However, if a molecule is dissolved in a dilute liquid crystalline medium, or other orienting medium, it becomes partially aligned, and the dipolar couplings are not completely averaged to zero.  This leads to a small contribution to the splitting of NMR signals. The angular dependence of these contributions can provide valuable structural information.  RDCs can be used to validate protein structures, to refine structures to improve quality, and to provide constraints as a part of an initial structure determination.  RDCs can also be used to determine the rotational symmetry axis of oligomers and this information can be use to properly orient the positions of subunits within an oligomeric complex.

Additional information can also be found at the following web site.

HSQC-TROSY pairs provide one way of measuring RDCs.  The procedure is applicable to proteins of small and moderate size (10-30 kDa).  The acquisition time in the indirect t1 should be at least T2 of nitrogen.  The measurements are easily visualized as displacements of peaks in 2D frequency domain spectra.  The HSQC member of the pair gives a single peak at the center of the four peaks expected in a fully coupled HSQC experiment. The TROSY member gives only the sharpest component. The offset in either H or N direction is one half (J).  Procedures for collecting this pair of experiments are described elsewhere in this Twiki (Experimental setup for HSQC-TROSY).

Brief descriptions of specific functions are accessible via nmrPipe –

Cautions: The usual Varian to NMRPipe macros will read in experimental parameters, but will not be able to perform data conversion since both the HSQC and TROSY spectra are collected in a interleaved manner and are stored in a single FID data file.  The above script includes the QMIX function to separate fids.

The conversion of data collected on most Bruker spectrometers can be accomplished with the following script.

The following script contains some data specific parameters including phasing parameters and convolution functions that will need to be optimized for each specific set.

Transfer all assignments (or cross peak labels) from a reference isotropic HSQC spectrum to TROSY and HSQC spectra obtained under both isotropic and aligned conditions.  The positions of  cross-peaks in the aligned HSQC spectrum usually change little with addition of an alignment medium; if they do change, there is often a constant offset for all peaks due to changes in the lock resonance.  Hence, transferring assignments is usually straightforward. Corresponding peaks for TROSY assignments are diagonally displaced (down and to the right) by 38-58 Hz.  The isotropic coupling (J) is calculated from the difference in Hz  between the 15N dimension of isotropic HSQC and TROSY spectra (the offset is one half (J), so the final value needs to be multiply by 2).  Similarly, the aligned coupling (J+D) is calculated from differences in peak positions for the aligned HSQC and TROSY spectra.  The Hz values of the corresponding peaks can be subtracted using a spreadsheet or script to calculate the RDC values.

The peak picking and assignment process can be done using any graphical NMR assignment program of user’s choice.  NMRViewJ has a special feature that would match and transfer assignment from one spectrum to another.   For this tutorial, we have included a Tcl/TK script for obtaining RDCs using NMRDraw and NMRWish; the process is broken down into five steps.


Function: Automatically pick peaks in NMRDraw for the isotropic HSQC spectrum and save the peak list as hsqc.tab to be use as reference peak list.  This script cuts out vast amounts of  non-essential data that are stored in the hsqc.tab file after initial peak picking, leaving only the labels and, HN and N ppm values.

Execution: Executing this script does not require code modification. The only requirement is that you add the output and input script names in the execution line of a LINUX operating system.

Function: This script takes the HSQC and TROSY peak tables that you created while peak picking and combines them into a single table. It also transfers the assignment from the isotropic HSQC to HSQC aligned, TROSY isotropic and TROSY aligned spectra. On execution, it opens “NMRWish” which can further help in transferring the assignment peak by peak from HSQC to HSQC-TROSY. All the blue peaks in the NMRWish display belong to the HSQC spectrum and the white peaks belong to the TROSYspectrum. The peak under consideration is on the crosswire of the NMRWish window.  A navigation bar will also appear along with the NMRWish display to allow user to visually inspect the assignment of each peak and make corrections if necessary. 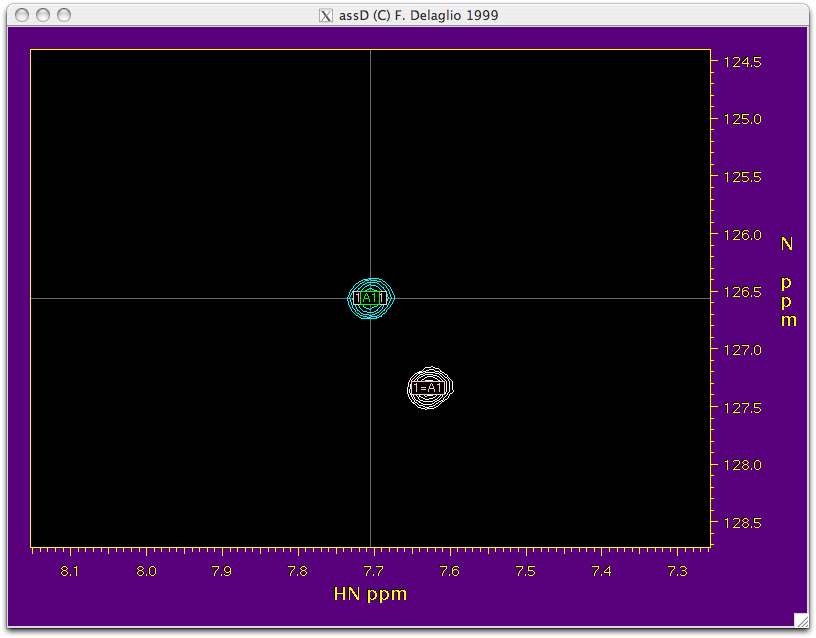 Execution: Executing this script requires editing the script file itself and changing a few values. Make sure that assName (from step 1), tabName1(peak table for HSQC), tabName2 (peak table for TROSY), and outName (output file name) have the correct input table names. You must also enter the height (contour level) at which you picked the peaks for hsqc in the hi1 field and the height at which you picked peaks for trosy in the hi2 field. Also make sure that the correct names for the .ft2 spectrum are specified in the script.

Function: This script calculates the coupling values for the protein.

Function: This script cleans up the output from the previous script (step 3) and outputs the necessary information (chemical shift of H and N in ppm and coupling values) into a new text file.

Execution: Execution of this script requires that you change a single variable in the script. Make sure that you set the outName variable to the proper media type (gel, peg, iso, etc…).

Function: This script calculates the rdc values for the protein.

Execution: We recommend that a new folder be created in the protein directory titled rdc_name? to organize and retain all of the files required to run this script. Copy or Move all of the required files into the rdc folder; these include: hsqc_ass.tab file and all of the *_j.tab files generated from isotropic data and each medium. Make sure that the assName, isoName, and othName We recommend the outName field to have the naming convention protein.name_rdc_media.tab (ex. rnr77_rdc_gel).