RPF is a module within the AutoStructure program that uses a novel, rapid, and simple approach for calculating global NMR structure quality scores [1,2]. This program calculates RECALL, PRECISION, and F-MEASURE (RPF) scores assessing how well the query 3D structure(s) fit to the experimental NOESY peak list and resonance assignment data. RPF scores quickly assess the goodness-of-fit of the query structure(s) to these experimental data, and can be used as a guide for further structure refinements. RPF also calculates discrimination power (DP) scores, which estimate the difference in F-MEASURE scores between the query structure and random coil structures, as an indictor of the correctness of the overall fold. The program is useful for quality of control protein NMR structures determined by automated or manual methods.

Comparing Recall and Precision scores during the course of a structure refinement can help to improve the peak picking process and/or identify errors in the input data, allowing refinement of the input used in the structure determination process. Generally, a reduced Recall rate compared with the Precision rate may suggest the existence of noise peaks in the input data set. High Recall rate compared with the Precision rate suggests that some weak NOE cross peaks have not been included in the NOESY peak lists because the corresponding signal-to-noise ratios are low. Good quality structures should have high Precision rates (few short inter-proton distances that do not have corresponding NOEs in the peak lists). Factors that could cause low Precision scores include surface amide proton saturation transfer, solvent exchange broadening, and conformational exchange broadening. The F-measure score provides a good measure of the overall fit between the query structure and the experimental data, while the DP score measure how the query structure is distinguished from a freely rotating chain model, accounting for data quality. Low F-scores indicate that the structure does not fit well with the input data. High F-scores and low DP-scores indicate that the NMR data does not have enough long-range information that can distinguish the structure from a freelyrotating chain model. Structures with F-measure > 0.9 and the DP score > 0.7 correlates to structures having accuracies of < ~ 2 Å rmsd.

The input files are the same as for structure calculation. In addition you'll need a coordinate file:

Like AutoStructure, peak lists in either Sparky or Xeasy formats can be used with the RPF program.

For XEASY peaklists you can use the the attached pks.awk script to renumber the aromatic peaks, then concatenate the result with the aliphatic peaklist:

AutoStructure 2.2.1 or higher version does not require a single peak list for 13C-resolved NOESY. No need to combine aliphatic and aromatic peak lists.

The same holds for the sequence file, though it is highly unlikely that one would need to modify a protein's sequence during refinement.

The control file is essentially the same as the one used for automated AutoStructure calculation. You may need to do the following:

Use PDBStat to convert your coordinate file to IUPAC atom nomenclature. Start pdbstat and type the following commands:

Here we assume that the output of CNS is =All_KKK_cns.pdb.

AutoStructure is sensitive to the atom name nomenclature of the PDB input file. In the output directory (e.g. calcQ) check the contents of the XXXX_NA.note file to see if the PDB file has been read correctly.

The scores will be reported in the overview (*.ovw) file in the output directory.

AutoStructure version 2.1.1 and higher has a GUI for RPF analysis providing additional features. However, older Linux systems may not have the proper graphics libraries to support it.

The RPF interface (From AutoStructure interface) provides a useful interface for the user to calculate RPF scores. Structures determined by manual or automated analysis, homology modelling, or X-ray crystallography can be used for RPF scores calculations.

Start the RPF calculation and open the output

RPF scores can be used as a quality control in iterative cycle analysis of protein structure determination in NMR. The RPF interface (shown in the figure below) displays the results of the iterative cycle analysis of NMR structure determination as a plot of the RPF and DP scores. The significant increase in the DP score from cycle 1 to cycle 10 demonstrates the improved accuracy of the final structure when compared to the initial and intermediate cycles. By the final cycle the F-measure is > 0.9 and the DP score is > 0.7 which correlates to structures having accuracies of < ~ 2 Å rmsd. During the iterative refinement process, as long as the structure does not have many bad proton-proton packing interactions, the Precision rate should be high and stay relatively constant. The below figure shows that Precision rates decrease slightly during the iterative process. This is due to the increased compactness of the structure over the course of the refinement, when additional weak NOE cross peaks predicted are missing from the input NOE peak lists (False Positives). The small decrease in precision over the course of refinement is diagnostic of the quality and completeness of the input NMR data.  In AutoStructure 2.4.0, RPF scores for individual models in the structural ensemble are also reported. 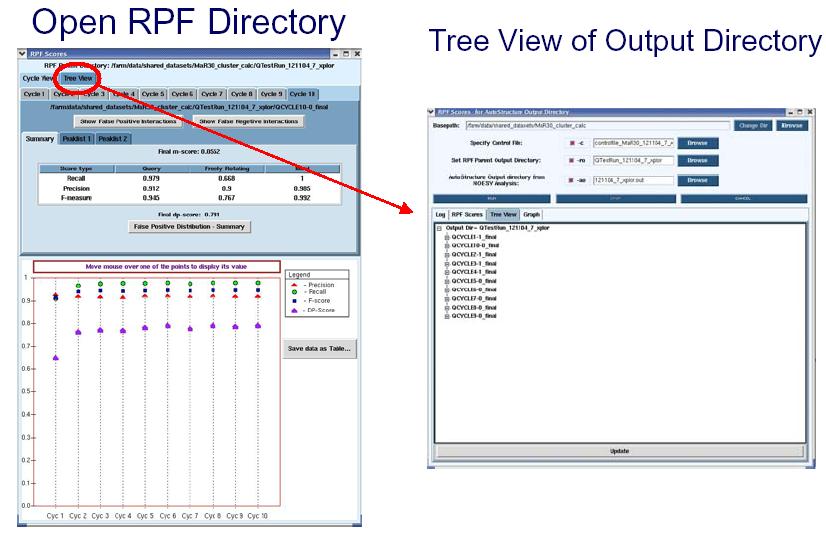 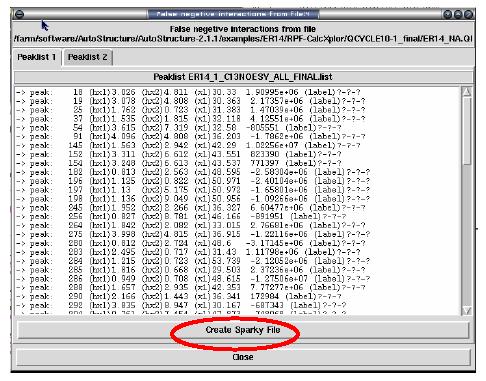