A standardized way to set non-uniform sampling (NUS) for TopSpin is in the making, however, while it is not yet included in the current distribution, this page will focus on the way Non-uniform sampling of 3D spectra is implemented by the Arrowsmith group in Toronto (University Health Network and University of Toronto). It is tailored for the subsequent processing with MDDGUI software, described elsewhere on this site.


To set up 3D NUS experiments according to this method one needs the following:

First of all, one has to set up a regular experiment with all pulses and delays calibrated as usual. Once this step is finished, one needs to replace the pulse program by a modified one.

This section briefly describes the essential pulse sequence modifications. The 15N-NOESY-HSQC pulse program is used as an example. In most cases one just need to copy these changes into relevant pulse program.

A good number of pulse programs are already modified and are available upon request (see Setting up non-uniformly sampled spectra):

Generating the sampling schedule and running the experiment

Once the experiment is otherwise set up and the pulse program modifications are in place, the last step before running the experiment is to generate the sampling schedule. Depending on whether your computer runs Linux or Windows, the generator differs slightly (mainly in the usage of forward and backslashes). Both scripts are available upon request from the Arrowsmith group (together with the above pulse programs). The corresponding script should be renamed sparse.py and put in /opt/topspin/exp/stan/nmr/py/user/ (Linux) or C:\Bruker\TOPSPIN\exp\stan\nmr\py\user\ (Windows) on your computer (NB! The directory may be slightly different on your system).


It can be called by typing sparse from the command prompt. 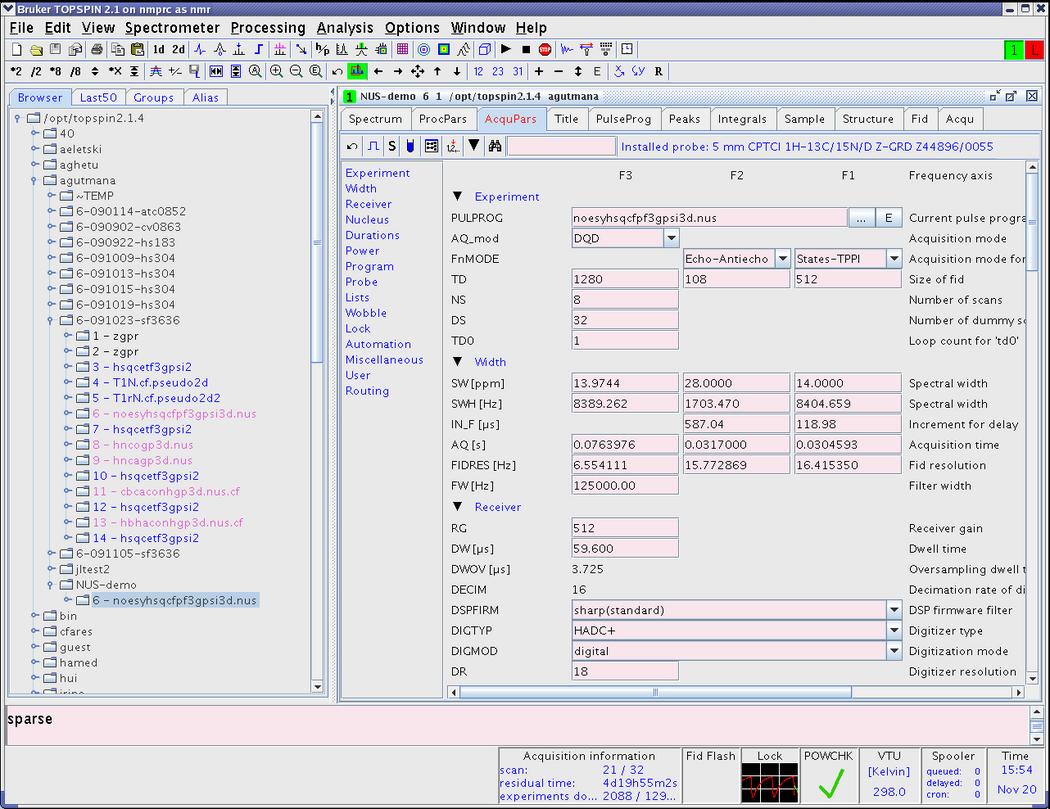 After the initial greeting, you will be guided through a few steps as shown below.

Figure 2. Where the new vdlist should be placed.

Figure 3. Providing the parameters. Level of "sparsing" will give the number of FIDs actually recorded.

Figure 4. Checking that the file is copied to the right place and that the number of FIDs makes sense.

The script and the sampling schedule have a few features worthy of some remarks: