IMPORTANT! In a recent MRC paper it has been reported that radiation damping can significantly affect the accuracy of temperature calibration. Spectrometers equipped with cryogenic probes are affected the most. Systematic errors of up to 2-3 °C were observed. As a solution, the authors recommend to observe residual proton signals in a sample of highly deuterated methanol (typically 99.8% methanol-d4). At present (Sep 2007), NYSBC employs this method for calibration of its spectrometers. Thomas Szyperski's lab is also adopting this protocol.

The general formula is

Here δ is the chemical shift relative to TMS, and T is the temperature in °C

Highly deuterated methanol is not yet provided as a standard sample, but you can order it from any supplier of isotope-labeled chemicals.

Consult you spectrometer's manual on how to prepare a sample. For Varian, a sample of not more that 3 cm in height in a regular tube is sufficient. You may want to avoid using very low sample height as it would affect the shimming.

You can tune/match the proton channel and lock the sample to the methanol signal. Because methanol spectrum has two lines, methyl and hydroxyl, the lock line will have a small modulation.

Because the sample is randomly deuterated to high degree, the hydroxyl signal mainly comes from the CD3OH species, while the methyl signal comes from CHD2OD. The methyl signal thus appears a 1:2:3:2:1 quintet due to 2J_HD scalar coupling of about 2 Hz. The chemical shifts of these two groups differ from those of pure CH3OH because of deuterium isotope effects. Therefore, macros for temperature calibration based on pure CH3OH (e.g. tempcal('m')) SHOULD NOT be used. The authors provide their own calibration function:

where Δδ is the chemical shift difference between the two lines.

A macro tempcal_cd3od has been created to perform temperature calculation according to the above formula.

Since the lines are much more narrow than in pure CH3OH, simply placing the left and right cursors on the peaks is not accurate enough. A better procedure is the following: 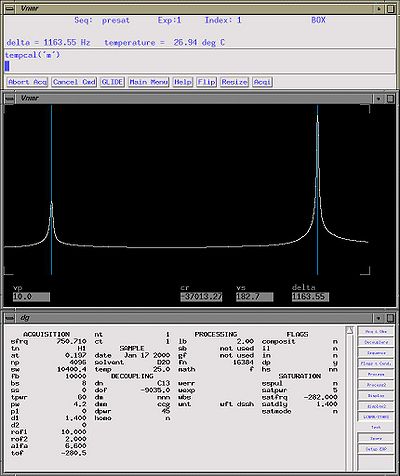 To verify the temperature do the following: